The ParanormYA Blog Tour has arrived at this stop. I've enjoyed getting to know the authors and their creations in following along on their tour. And now for the people, characters, I've been waiting for:

Indigo Eady (Givin’ Up The Ghost) sits at her bedroom desk at PIP Headquarters. Soft morning light filters through the window across the paper she’s scribbling on.

Abigail Bishop (Neverlove) enters the room. “What are you doing?”

“I’m making a list of pros and cons of self-publishing.”

“Oh? What does it say?” Abby leans over Indigo’s shoulder and reads.

Abby leans over and points at the last sentence. “Hey, what’s that supposed to mean? Real authors?”

“It means,” says Indigo, “that some people think because you don’t go for the big publishing houses that your writing sucks. That you’re not a real writer because you’re not traditionally published.”

Abby snorts. “Well, we know that’s not true.” She sits down on the edge of the bed and leans her forearms on her knees.

“We sure do,” Indigo agrees, twirling in her chair to face Abby. “I mean, we wouldn’t be sitting here, house-sitting PIP Headquarters if Angela Brown and Gwen Gardner weren’t real writers.”

“And the truth is, neither of them even queried our - I mean their - books.”

“No.” Abby shakes her head. “Look at the Pros of Self-Publishing list. It’s all about in charge of and control over. They’re control freaks. That’s why they self-published.”

Indigo’s hand jumps to her heart. “What? What is it?”

“I just had a scary thought.”

“Crap. Don’t scare me like that.” Indigo shakes her head.

“No, seriously. Listen.” Abby catches Indigo’s gaze with her own.

Abby continues. “What if they aren’t real writers?”


The girls stare at each other, blue eyes locked with hazel.

Indigo pulls out a drawer and riffles through it, spilling the contents out haphazardly.

“What are you looking for?” says Abby, coming to stand beside her.

“Markers. Aha! Here they are.” Indigo spreads the rainbow of colors across the desk.

“What are we going to do?” asks Abby.

***
Are you a self-publisher? What do your characters think about it?

Born and raised in Little Rock, AR, Angela now calls Central Texas home.  She's a lover of Wild Cherry Pepsi and chocolate/chocolate covered delicious-ness.  Steampunk, fantasy and paranormal to contemporary - mostly young adult - fill her growing library of books.  Mother to a rambunctiousdarling girl aptly nicknamed Chipmunk, life stays busy. Her favorite quote keeps her moving: "you may never know what results come of your action, but if you do nothing there will be no result." ~ Mahatrma Gandhi

Purchase Gwen Gardner’s Givin’ Up The Ghost at Amazon US and Amazon UK.

Running, writing and reading are my favorite things.

I am also a dreamer.

Have you ever told yourself that "some day" I'm going to travel or write or whatever it is that you are passionate about but can't do right now for whatever reason? You can go for years and years and keep telling yourself that "some day" you'll do it. Too often "some day" never comes. But mine did. I am a former Administrative Manager and Vice President of a successful swimming pool plastering company - until I woke up one day and realized that my "some day" had arrived. I quit my job, moved to the mountains and began to write. Crazy, I know. But even crazier? Is when you get to the end of your life and realize that your "some day" is too late. Life is much too short for that! So the adventure has begun. 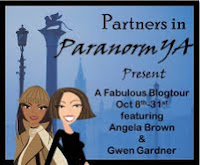 And there are two giveaways! Visit Partners in ParanormYA for the Big Swag Giveaway and for theWeek Two Giveaway

Comments are greatly appreciated. Just remember-children may be reading these.

I turned off the captcha but not moderation. Sorry. This is a way for me to make sure I do not miss a comment as I am notified.

Welcome to my blog